Ah, the cover version, the last resort of the washed- up artist! Or, a chance for the creative genius to sprinkle some extra magic on a classic song? The following is a presentation of the best cover versions of all time, and a detour to the worst, press play and hear how great artists can make a great song even greater!

The best cover versions have one thing in common, they bring out something new in the original; slowing or speeding up tempos, completely re-orchestrate the song, accentuate different elements, change the groove etc. There are many methods and tricks to giving a song a make-over, but the end result must be bringing something new.

To limit the scope, I’ve decided not to include R&B/Soul covers, that is a whole world onto itself, and artists tend to stick to the stylistic parameters of the genre, not necessarily bringing a new sound to the song.

At the top of the list, I have a rather uncontroversial choice, Jimi Hendrix’ version of Dylan’s All along the Watchtower. When the original artist claims your version is better than the original, you are probably doing something right! Hendrix took a basic folk song and gave it his full cosmic-rock, space-guitar treatment and created a timeless classic.

The second choice takes things in almost the opposite direction, taking something more compact and layered, stripping it down and giving it more gravitas, Johnny Cash‘s version of NINs Hurt. Cash’s later Rick Rubin produced albums brought out the best in the legend, and when the choice of song to cover matched the man’s considerable talent for storytelling, the result was almost always improving on the original!

Jeff Buckley‘s version of Leonard Cohen’s Hallelujah is another obvious choice. In this case both the original and the cover version have sparse instrumentation. The fact that the voices are perfect opposites, however, marks a big difference; Cohen’s charismatic bass speak-song vs. Buckley’s virtuoso, soaring tenor. Buckley’s reverb-drenched Telecaster has the effect of underscoring the “celestial” atmosphere of the song, setting it further apart from the more “earthy” original.

Led Zeppelin’s history with covering other artists is not without controversy as proper songwriter crediting wasn’t always a priority. Legal and ethical issues aside, what those that accuse/d Led Zeppelin of being just common thieves or  “blues appropriators” completely miss, is that whatever they touched sounded 100% like Led Zeppelin. It didn’t matter whether the lyrics were snatched from an old blues tune, or if three chords were “re-purposed”, the end result always sounded like no other band on the planet. No better example of this exists than When the levee breaks – an old blues tune turned inside out and made into an apocalyptic epic, in which production and instrumental performances take basic elements of the blues amplifying (also literarily) these to monstrous proportions. The end-result being an alien built from archaic building blocks that can barely be glimpsed in the final creature.

Switching a male for a female lead vocal is the approach in my most left-field choice, Hanne Hukkelberg‘s take on the Pixies’ Break My Body. This is a favorite because it represents the most complete reworking on a song on this list. Here, every trick in the book is deployed, lead-vocal sex change, tempo change, completely different instrumentation and production. It is a perfect example on how a complete reframing of a song can give it a whole new meaning. Whereas the “horny loser” in the original is an aggressive, desperate beast, in Hukkelberg’s version s/he is a melancholy, tender creature. Both takes, equally brilliant!

Turning from the most differentiated version of a song, to a cover that doesn’t move that far from the original, The Clash‘s version the Booby Fuller Four’s I Fought the Law. In many ways, punk was just a sloppy, more aggressive take on 60s garage and pop music. Ramones were basically Beach Boys without the vocal skills and the stellar backing musicians! The Clash’s beefed up version of I Fought Law merits a place on the list for the attitude they bring to the table, making this song their own.

Talking Heads being one of the most singular acts in the history or rock, it is only to be expected that they manage to pull-off the challenge of owning a cover song. Point in case, their version of Al Green’s Take me to the River. Simply switching from Green’s soulful croon to David Byrne’s robotic yelp is enough to impregnate the track with a whole different feel. Talking Heads give the song a spin through their idiosyncratic instrumentation, but managing to maintain a lot of the song’s warmth.

Hearing two great voices take on the same song is always a special treat, and  This Mortal Coil‘s version of Tim Buckley’s Song For the Siren adds another spectacular voice to the song’s history, Elizabeth Fraser’s. Besides being interpreted by two unique voices, the versions of the song also have in common a dreamlike melancholy that the melody paints out. The cover, though, is imbued with 80s synth-sounds and a big reverb on the voice, contrasting with the intimacy of the original.

Wrapping this up, I decided to choose a relatively new cover version, which switches the table around, as a a previously mentioned songwriter, Trent Reznor covers a previous “cover band”, Led Zeppelin. Zeppelin has been the victims of some horrific attempts at covering their songs. One candidate to make this list, though, is Dolly Parton’s over-the-top gospel inspired take on Stairway to Heaven, but I settled for this version that has Trent Reznor and Atticus Ross (with Karen O on vocals) giving the almost cartoonish riff (and lyrics) a new layer of menace with their electronic twist on the sound.

Worst Cover Album of All Time

A cover album from a band that has made, at most, 3 good songs through their career is bound to fail, but to fail so spectacularly as Duran Duran does here is quite a feat! Absolutely unlistenable audio-massacres of Dylan, Sly Stone and Public Enemy (!!) among other unfortunate  tribute “victims”. No thank you! 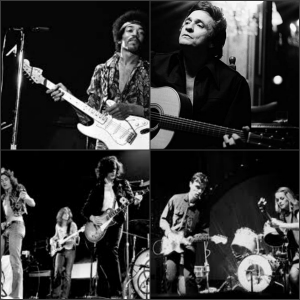 Article Name
Best all-time cover versions
Description
A presentation of the best cover versions of all time, in popular music, from Jimi Hendrix to Tricky. The artists who brought a new energy to famous songs.
Author
Bo Vibe
Back